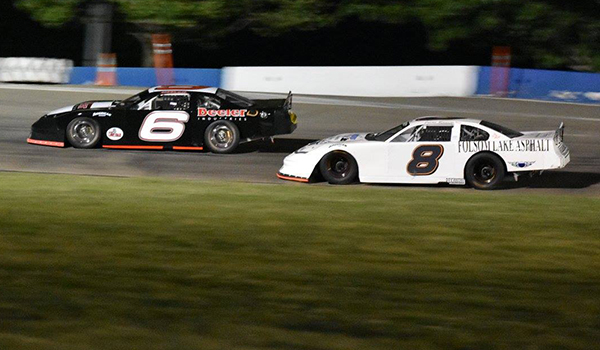 SACRAMENTO, CALIFORNIA (April 18, 2018) – Round #2 of the 2018 Pacific Challenge Series presented by PenneyLawyers.com will hit the 3/8th mile Shasta Speedway in Anderson, CA on Saturday night.  The largest facility on the series’ calendar hosts the PCS twice in 2018, with local drivers aiming to challenge the touring stars of Northern California’s Super Late Model Series.

Saturday’s races take place during the “Kool April Nights” classic car event taking place throughout the area, making for a gearheads paradise in the north state.

Carlos Vieira won the 2018 season opener for the PCS at Madera Speedway in March.  Vieira dominated the 75 lapper but faced company late in the race from hard-charging Randy Hedrick of Reno, NV.  Hedrick settled for second place with 2015 series champion John Moore in third.

The 2017 visit to Shasta attracted an outstanding 18 car field and saw 2009 All American Speedway champion Jason Romero set fast-time and win the American Racer Tire dash before a flat tire knocked him from the lead on lap 18.  Cole Moore also ran strong before he succumbed to mechanical problems late in the race.

Shasta is one of the few tracks where 14-time racing champion Dave Byrd has not yet visited victory lane.  He came close in July 2007 – his last trip there – when he finished second in the SRL Southwest Tour series.  June 2016 Shasta PCS winner Tracy Bolin finished third in that particular event as well.

Three-time All American Speedway champion Matt Scott will make his first start of the season, still searching for his first PCS victory.

Racing action on the 3/8ths mile will also include Bombers, Hornets, and Legends of the Pacific.  Racing gets started on Friday with practice.  Gates open at 1 p.m. with practice under the lights from 4 p.m. to 8 p.m.  Pit passes are $45.  On Saturday, gates open at noon with a $45 pit pass fee and a $100 PCS entry fee.  Practice, qualifying, and racing will follow.