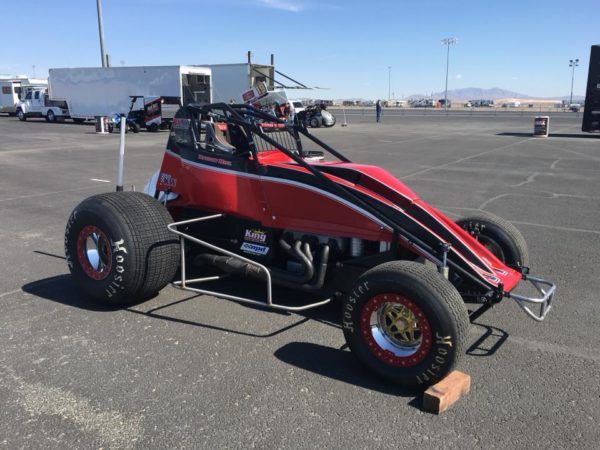 MADERA RANCHOS, CALIFORNIA (March 6, 2018) – The 2018 USAC West Coast 360 campaign for Dalton Hill kicked off in a big way last week, with Hill steering the #81D to a podium finish during Wednesday night’s non-points race at the Dirt Track at Las Vegas Motor Speedway.

The combined race with the USAC Southwest Sprints attracted several drivers with USAC National Sprint Car Series wins to compete in the early season event.  It also served as an undercard for the World of Outlaws.  Hill qualified 16th on the big half-mile with an 18.448 second lap to set things in motion for the rest of the evening.  A fifth place finish in the heat race set Hill to start from 13th for the 25 lap feature.

Hill was aggressive in his pursuit of the front of the field as he has done several times in his young USAC career. Several cautions aided the cause which allowed Hill to drive all the way up to fourth at the checkered flag in a hard-charging performance.  He even recorded his fastest lap of the event on lap 24.  Hill was then awarded third after an adjustment of the results due to a disqualification of the winner.

“I honestly didn’t think I would be able to pass that many cars with the level of talent and it being my first time at Vegas,” Hill said.  “After the race I was super happy and a little emotional.  This finish gives me the confidence to know that I can compete with the best of them this year.”

The Double D’s Motorsports team intended to ride the momentum into Thursday’s race night but trouble struck.  After timing in 12th and running fourth in his heat race, Hill developed an engine issue that forced him to miss the main event.  More concerning is that engine issue bounces Hill from this weekend’s season opening points races for the USAC West Coast 360s at the Tulare Thunderbowl.  The team is actively seeking a solution to be able to compete on Friday and Saturday.

Race fans can keep up on all of the action for Dalton Hill Racing on Facebook or by visiting www.DaltonHillRacing.com