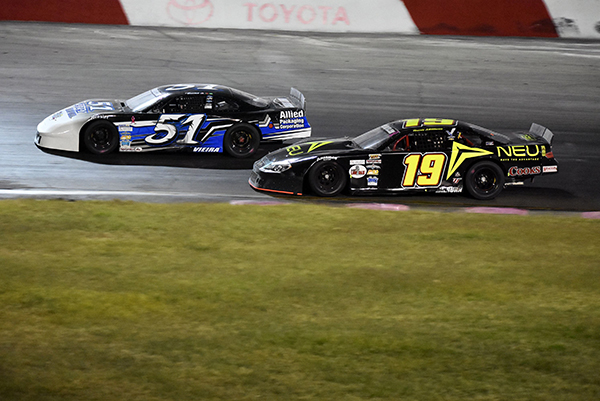 SACRAMENTO, CALIFORNIA (February 23, 2018) – Super Late Models will roar in Roseville three times in 2018, as the Pacific Challenge Series presented by PenneyLawyers.com hits the All American Speedway.  The Bill McAnally-promoted facility will welcome the PCS on May 19, September 8, and the series’ championship finale on October 13.

The one-third mile speedway at the newly renovated The Grounds (previously Placer County Fairgrounds) serves as the unofficial home track of the series. It is the geographical center of the 2018 campaign with many teams and series supporters located in the greater Sacramento region.

All American Speedway has hosted 19 events between the PCS and its AABLM predecessor. Two-time champion Jeremy Doss leads with six career wins while Jason Romero has won five PCS races at his home track.

2017 PCS champion Mike Beeler has attended all 14 races since the series became the PCS and used a seventh place finish in last year’s finale to claim his second series championship.  19 cars competed in the race with Matt Wendt scoring his second career series win in a crowd-pleasing near photo finish against 2009 track champion Romero.

The 2018 series’ finale in October is again paired with the NASCAR K&N Pro Series, West and North State Modifieds for a potent night of racing action. Nearly 5000 fans attend the event each year.

Local divisions such as Limited Modifieds, Bombers, and F4s will be paired with the PCS for its other two visits.