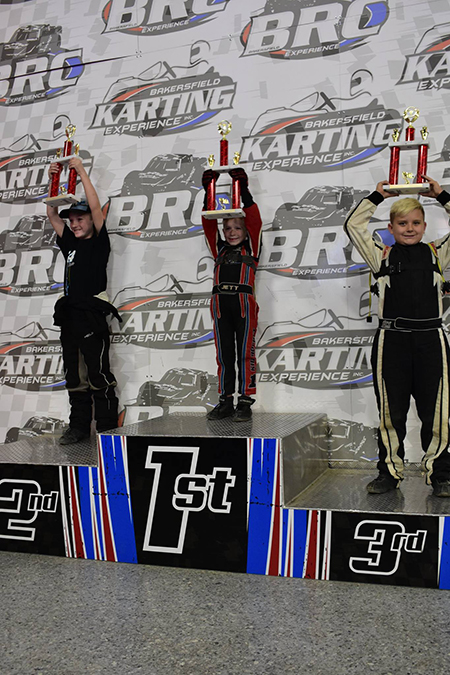 Nine Sr. Mini Dwarfs took the green flag with Yantis jumping out to an early lead.  Trenton Eurto tried to reel in Yantis in lapped traffic but could not close in enough for an attempt at a pass.  Brodey Graham had an intense battle with Tyler Blankenship for third with Graham grabbing the position in the end.  Yantis’ victory was his second consecutive in the venue to go with his 2017 Bakersfield Speedway championship.

Bryson Martin had a similarly dominant performance in the Jr. Mini Dwarfs, pulling away after a mid-race restart for the victory.  The Jr. Jr. class saw young lady driver Emma McKellar top the BKE podium for a popular win!

Bakersfield Karting Experience has a busy January in store.  This Friday night will be an Open Flat Kart event while Saturday night will feature another Supercross viewing party!  Both events will have the full complex open including Smokey’s Pub & Grill, arcade games, golf simulator, rental kart racing, RC car racing, and so much more.

Anticipation is growing for the inaugural Bakersfield Indoor Kart Nationals January 19-20.  Open Outlaw Karts will race for $400 to win Friday night and $1000 Saturday night with over 30 competitors expected.  Jr. and Sr. Mini Dwarfs and Beginner Box Stocks will run Friday the 19thwhile Saturday the 20th will have a $200 to win Clone kart feature and Box Stocks.  Each night will have complete racing including eight lap heat races and 25 lap features.  Entry and rules information can be found on the Indoor Kart Nationals Facebook event page.

$6000 in posted awards should draw a large contingent of racers from across California.  Early entries include drivers such as Bakersfield Speedway IMCA Modified champion Brad Pounds, drivers from Northern California such as Brandon Williams, and kart veteran Dale Cheeseman.  Pit passes will be priced at $20 each night with reserved pit spaces available inside the building while the remaining teams will pit outside.  A pre-entry form is available at http://www.norcalmedia.com/assets/BKE2018Nationalsentryform.pdf

General admission tickets will be $10 for Friday night and $15 on Saturday night.